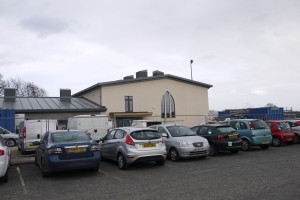 “Look at the nations and watch  and be utterly amazed.  For I am going to do something in your days that you would not believe, even if you were told.” Habakkuk 1:5

It would have been impossible to imagine in Summer 2012 that in just a few short weeks we’d be moving into a new church.

And, though the building work began last May and the preparations for the opening have been going for months, perhaps like me you’ll have to pinch yourself come Easter Sunday to believe it’s actually happening!

How far we have come so quickly!  When I arrived at St Mary’s two years ago we’d been without a church for 25 years and there seemed little prospect of getting one.  Then, as if in a flash, the opportunity to work with The Coppice on a new building project emerged.

The news was received then as simply this: it’s a gift from God.

Of course there has been hard work along the way.  There are many people to thank, without whom the project would not have been possible, and even more currently in the midst of a storm of activity to get everything ready.  And that’s not to mention the faithfulness of those among us who have been praying for decades for this moment.

But through all of this that sense of gift remains.  This project has shown time and again that whilst we may have plans, it is God who causes the rising and falling of things, and who sets the dates and times.  Not primarily because we worked hard or didn’t, or because we’re worthy or not, but because of his will and his plan.

In this season of anticipation and then celebration, then, all thanks and praise must go to God.  Let us remember that this new church is a gift from him, and seek to play our part in the unfolding of his plan for our world.  Like the prophet Habakkuk, let’s prepare to be amazed!

Rich (included in our Spring 2014 newsletter)