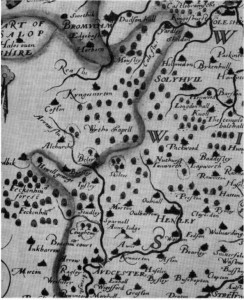 Most surprising, in this backwater of the Midlands, was the importance in the medieval road system. The Romans had left a street, now called Ryknield Street, just to the west, but not really in the area. For many purposes traffic seems to have deserted it for another route, still much used, represented by Redhill Road to Brockhill Road to Watery Lane to Portway. That road appears as Mapoldren geat (the maple tree road) leading to Mappleborough Green in the Saxon boundaries of Beoley. 1

It was later called Paynels Way in 1289 and 1344
(perhaps after the Paganel family, lords of Northfield (and Dudley) in the twelfth century) and Portway in 1446.

But a more important road is that now represented by Radford Lane to Hill Lane to Chapel Lane and Station Road. This meandering series of lanes is actually marked on the oldest existing road map of England, the Gough map of about 1330, as a route from Droitwich to Coventry. Identification is made possible by the inclusion of the same route as part of a road from Hereford to Leicester on Plate 72 on Ogilbys Britannia, 1675. That quiet cross-road by Hall Farm (the old Weatheroak Hall) was thus a great junction taking traffic in two directions by-passing Birmingham. Birmingham itself appears only as a halt on the route from Droitwich to Lichfield. It is interesting to note that Wythworth Chapel was thus on the “main road” of that time. No positive reference to Alcester Road, Wythall, appears until much later; it is probably significant that the Gough road crosses it as if it did not exist.

History does not rise to our bidding. More records have been lost than now remain and we only marvel that we can find as much as we do.

Christopher Saxton’s maps – the first printed County Maps – are the earliest definite evidence. In 1576 his Warwickshire map marks Wytho Chapell and in 1577 his Worcestershire one marks Withe Chap. The Sheldon tapestry map of about one hundred years later depicts Witho Chal and the Emanuel Bowen Atlas of 1763 shows Withorn Chapel. These curious names are perhaps of abbreviating Wythworth, or perhaps show the beginning of a lazy pronunciation. None was ever the real name, as they only occur in maps and travel books copied directly from Saxton.

Few, if any, places of worship were founded between the Reformation and 1576, and it is fair to presume a pre-Reformation origin. Records of foundation exist in episcopal or papal registers for most late medieval chapels; thus it is possible, but very cautiously, to suggest an early medieval date for Wythall Chapel. In these times landowners were tending to found chapels on their various estates and it is possible that the de Belnes, who built the chapel at Bell Hall, Belbroughton, also built one here. King’s Norton, the parish church, was cut off by the uninhabited area of Kings Wood

Nov
27
Sun
9:00 am Communion Service with hymns
Communion Service with hymns
Nov 27 @ 9:00 am – 10:00 am
A weekly service in the church building. This is usually Holy Communion. All welcome.
10:30 am Morning Worship
Morning Worship
Nov 27 @ 10:30 am – 11:45 am
Our informal morning service, with children’s groups. Once a month the children and adults are together in church for our All Together Service, usually on the 4th Sunday of the month. Coffee and refreshments follow the service.