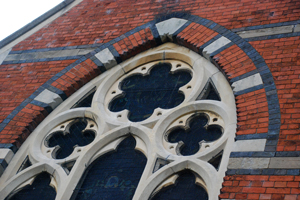 The last few decades have told a long and eventful story of Wythall’s Parish Church, but the new chapter which began at Easter 2014 has been a joyful one so far.  Why not come and be part of it with us!

Local people will remember the decision to close the old St Mary’s church on Chapel Lane in 1987, due to a structural survey which declared the building unsafe for worship.

Whilst it was initially hoped to return to the old church, estimates revealed that the repairs and redevelopment needed would cost at least as much as building a new church.  In light of this we took the difficult decision of leaving the building and looking for a new site for a church – closer to where most people lived, warmer, more flexible and with good parking facilities.

Therefore, in 1999 the old church building was sold to be turned into offices.  Such was the liability of the building that it was deemed only to be worth a nominal sum as it stood (£35,000), whilst the bill for the buyers to repair, reinforce and renovate it would come to over £1m.

Unfortunately for St Mary’s the hopes of building a new church were not immediately realised.  Over the years a number of potential sites and plans were considered and rejected, and planning applications turned down.

Meanwhile the congregation made their home in a number of different local schools – first Meadow Green, then Silvermead, Woodrush and finally The Coppice from January 1996.  Whilst the church survived, even thrived, during this time we know many in the community missed having a church they could call their own, and the hope for a new St Mary’s church always remained.

In Summer 2012 The Coppice secured funding to develop their school, which would entail building six new classrooms and a new hall.  Initial conversations with St Mary’s became a formal plan, announced in January 2013, to incorporate a new church into the development.  That plan became a reality on Easter Sunday 2014 as the new church opened.

We will always be grateful to The Coppice School, without whom the project could never have happened.  As well as enabling the continued link between church and school, the sharing of ideas and resources led to a facility of great benefit to both parties and the wider community as well.

In addition there have also been significant cost savings by working together.  Contrary to popular belief the Church of England, especially in Birmingham, does not have spare resources to pay for new buildings, and the responsibility for financing a new building was always going to fall on the local church.

As such a building fund was built to help out in the event of a new church becoming a possibility.  This comprised largely of gifts from church and community members and the sale of property bequeathed to us in the early 20th century, invested wisely over the last 25 years.

Whilst a standalone project for a new church would have certainly entailed a substantial and lengthy fundraising campaign, working together meant that our existing building fund, augmented by generous giving from the congregation, has been enough to pay for our part of the new build in full.

Our prayer for the new St Mary’s is that it becomes more and more a focal point of worship, prayer and community for all who live in Wythall and Hollywood.