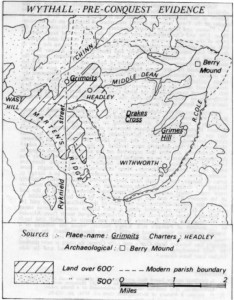 Since human settlement in early times was largely governed by the physical and geological background we must begin by examining these aspects of the landscape. At Wythall the headwaters of the River Cole, a feeder of the Trent, meet the central watershed of England on the Birmingham Plateau and form the eastern boundary of the parish. Its tributaries, the Shaw, the Lint and the Chinn brooks  run through the eastern and north-western parts of the parish, forming small valleys, whilst the central and southern part of the area may be described as a broad plateau rising on the west to the 600 feet contour at Weatheroak and Headley Heath. Mercia Mudstone, the thick, red clay covering much of the West Midlands, extends across the parish and supports a natural vegetation of damp oak forest unsuitable for settlement with its very dense undergrowth-a fact which in part explains the paucity of prehistoric material in the area. However the Pleistocene deposits, including boulder clays, sands and gravels, provide belts of well-drained soil upon the great spread of Mercia Mudstone; at Wythall there is a belt of gravel terraces along the River Cole and it is here at Berry Mound, north-west of Majors Green that the first reliable evidence of occupation is to be found in the parish 1

Although not on the highest ground in the area, Berry Mound is strategically well sited, being once surrounded by watercourses and marshes. It comprises a rampart and ditch forming an eleven acre oval enclosure. William Hutton, the Birmingham historian of the 18th century, reported that the defences were then “in tolerable perfection; the ditch is about twenty feet wide; the base of the bank about the same”, 2 but between 1865 and 1871 the ramparts were levelled on the west and north sides. 3 The earthworks are now best preserved on the south-east where a gap in the rampart appears to be an original entrance, although the causeway was found by excavation in 1956-57 to be modern; 4 at the north there are traces of an in-turned entrance. More extensive excavation might show whether Berry Mound was permanently occupied or used as a refuge in times of danger, but no finds have been reported from the site. 5Similarly lacking any dating material from excavation, the hill fort’s origins must remain open; recent authorities have speculated between a date in the 2nd or 1st century BC  6 and last minute attempts by the local population to combat the Roman advance into this part of the Midlands in the mid 1st century A D. This proceeded along a road known since medieval times at Ryknield Street and built by the advancing legion north from Alcester (Alauna) to Metchley (near Selly Oak) and Wall (Letocetum) near Lichfield. It enters Wythall just north of Forhill and leads to the summit of Parson’s Hill, King’s Norton, where the remains of a Roman settlement were found in 1951. 7 More recent excavations have also suggested Parson’s Hill as the site of Boudicca’s last battle. Headley Heath, the present road meanders for about half a mile, whilst the Roman road followed a straight line between Seals Green and Lilly Green. Its route is now marked by field boundaries with traces of the agger of the road and its side ditches near Seals Green. 8

In the second half of the 6th century Angles and Saxons were penetrating the forest regions of central England, worshipping pagan deities whose names are preserved in local place-names. The Anglo-Saxon god of war, Woden, was nicknamed Grim – a name which appears in Grimpits Farm at Headley Heath and probably at Grimes Hill. 9 One of their temples was situated at Arrowfield Top between Alvechurch and Hopwood, for the name signifies a place of heathen worship.  10
Belief in spirits and lesser deities is preserved in such names as Drakes Cross, a corruption of Drakeness, meaning dragon, and Hob Hill near the source of the Cole, a shortened form of hobgoblin or the devil. By the second half of the 7th century, Christianity was established in the kingdom of the Hwicce – Gloucestershire, Worcestershire and West Warwickshire – replacing heathenism by a religion of the Book which could become integrated into society.

Some two hundred years after the arrival of Christianity in the West Midlands we have the first documentary evidence relating to the Wythall district in the form of a land charter of 849 whereby Alhhun, bishop of Worcester, granted to King Berhtwulf five hides at Cofton, Rednal and Wast Hill and two at Hopwood. The bounds as given in the grant pass by Headley Heath, which appears as Haethleage meaning a clearing amongst the heath land, and go to a place called Middle Dean which Grundy identified as the valley between Dark and Packhorse Lanes. 11 The River Cole is then mentioned (possibly near Major’s Green) and “so along the stream to Withthan Weorthan”. The latter has been identified  12 as the Saxon form of the place-name Wythall; it means the enclosure (worth) where withies or oziers are grown or prepared. Withthan Weorthan in modern English is simply Wythworth, a name used right through the Middle Ages. Place-names with the compounds leah and worth are generally thought to indicate secondary settlements for an expanding population from nearby primary centres ending in fun (homestead or village).We may thus tentatively suggest that Wythall and Headley were colonised, perhaps in the mid 8th century, from an earlier settlement at (King’s) Norton and because of this connection were later included in the parish of King’s Norton when the bounds were defined in the late Saxon period.