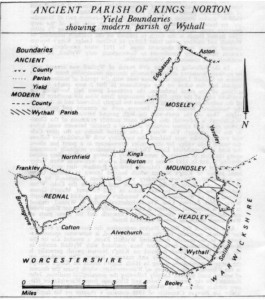 The parish of Wythall lies immediately south of the city of Birmingham; in the north-east corner of Worcestershire. Originally it formed part of the ancient parish of King’s Norton, corresponding to most of the yield (taxable division) of Headley (the area between Packhorse Lane and Dark Lane)) and the south-eastern part of Moundsley (between Crabmill Lane and Walkers Heath Road). Its history is therefore inextricably tied up with that of the very extensive royal manor and parish of King’s Norton. Stretching 7 miles from Balsall Heath in the north to Inkford on the southern boundary of Wythall and another seven from Lickey to Solihull Lodge, King’s Norton covered almost twelve thousand acres. In 1911, when two-thirds of the ancient parish were transferred to Birmingham, only Wythall, its most southerly part, remained in Worcestershire.

In the following year the civil parish of Wythall was created with its northern boundary drawn arbitrarily through countryside from Walkers Heath to Solihull Lodge; only since then with the spread of modern Birmingham has this taken on any significance in that it now marks the beginning of the rural landscape, the proposed green belt bordering the southern edge of the city. On the remaining three sides the southern limits of the ancient parish of King’s Norton are largely followed and in the main the boundaries follow natural features such as streams and prominent ridges. Thus on the south-west the high ground between Red Hill and Weatheroak is followed; this is the most easterly extension of the Clent / Lickey ridge and almost certainly acted as a frontier between local tribes in the 9th century 1 via Watery Lane towards Beoley; to the river Cole and county border near Inkford. The boundary with Warwickshire follows the broad Cole valley for three miles downstream to a point just above the ford in Houndsfield Lane. The county boundary originally continued along the Cole to Shirley-a name possibly meaning the “boundary (shire) clearing” 2 but in 1243 it was pushed half a mile westwards when Henry III granted to William de Odinsell, Lord of Forshaw, that part of his royal manor of King’s Norton which became known as Solihull Lodge or lodgement. 3

The new boundary was fixed from Peterbrook by way of Truemans Heath to the Shaw Brook and back to the Cole. When Solihull rose to county borough status in 1962 however, Major’s Green became part of Worcestershire, the boundary being marked by the North Warwickshire Railway Line. The ecclesiastical parish of Wythall, created in 1853, is somewhat different; it embraces Hollywood but not Kings Wood and includes Forshaw Heath towards Tanworth and the lower parts of Weatheroak beside the Roman Icknield Street.

As a result of the King’s Norton connection the documentary evidence for Wythall especially for the medieval period, is somewhat sparse. References to the recently demolished Wychall Farm, a moated site on the Northfield boundary, have often been confused with Wythall entries in the past. The published material on King’s Norton parish generally is largely concerned with family and manorial history. The emphasis on the latter is particularly strong in Hilda Light’s article on King’s Norton in the Victoria County History of Worcestershire, which traces the descent of several local manors. Largely following the genealogical tradition, John Burman’s books ‘In the Forest of Arden’ and ‘Gleanings from Warwickshire History’ contain references to Wythall and outlying districts such as Forshaw, whilst his ‘The Burman chronicle:the story of a Warwickshire family’ of 1940 contains a chapter on his family’s connections with Houndsfield Farm. Over the last ten to fifteen years however the story has been widened both chronologically and socially. Thus whilst the origins of a local community at Wythall may now be traced back over 1100 years its real growth followed in the medieval period when peasant colonists began to bring its vast reserves of wood and waste into cultivation. Not until the final enclosure of heath lands in the late 18th century was the rural landscape’s pattern of small hedged fields and consolidated farmsteads complete.

In the present century Wythall’s rural landscape has been transformed into a largely semi-rural one. Since the last war there has been considerable development on the eastern side of the old Alcester Road, particularly at Hollywood which houses most of the present population of 10,000. From 1956-60 an estate was built from Hollywood Lane southwards towards May Lane; this was continued between 1963 and 1966 on the Paddocks Farm site. A pre-war council house estate in Simms Lane was further developed in 1952 by Mynors Crescent and adjoining areas, by the Innage, Rye Croft and Flax Close in 1963-64 and by Houndsfield Grove Flats in 1966-67. At Trueman’s Heath, development has taken place along Windrush Road (1963) and in two stages near Little Trueman’s Farm in 1963 and 1966. At Major’s Green an island of ‘suburbia’ has been created by adding to pre-war property in 1956 and by further expansion and infilling between 1964 and 1966. Most of the northern end of Station Road belongs to the pre-war period, with some more recent work at Grimes Hill. The western portion of the road contains a 1962-63 development with work of the 1950’s at the rear adjoining Gorsey Lane.

Because of its proximity to the city of Birmingham Wythall has been the subject of repeated attempts by the city for permission for overspill development within the parish. In July 1959 Birmingham applied to develop 2,432 acres in the parish to build 14,000 houses and two industrial estates. The area proposed for intensive building lay due south of the city boundary from Druid’s Lane and Maypole Lane to Major’s Green, Grimes Hill, the R.A.F. station and by Middle Lane back to the city boundary. This application was rejected eight months later by the Minister of Housing and Local Government, Mr Henry Brooke. Wythall residents, thinking the battle was over, were surprised when the minister later proposed that 600 acres should be excluded from the green belt at Wythall for development by the city. This led to the second Wythall inquiry which began in November 1961. During the four months before the decision was given, a change of minister brought Dr Charles Hill into office. Soon after his Appointment, Dr Hill firmly rejected the Wythall plan. However in May 1964 Birmingham renewed its proposals and applied to develop 420 acres in the Kings Wood area to house 17,000 people. Two months after the general election, of October 1964, which brought the Socialists to power, the new Minister of Housing, Mr Richard Crossman, announced his decision rejecting the Wythall scheme because of the proximity of Redditch new town, but allowing 1,540 acres to be developed at Chelmsley Wood, Water Orton. The fourth inquiry in 1969 involved Birmingham’s application to build 11,000 home at Hawkesley, Frankley and Moundsley together with three balancing lakes at Hollywood. This resulted in the city gaining permission for development at the first two sites, but a firm refusal to further encroachment on Wythall’s green belt.

Since this document was produced, extensive housing development has taken place between Houndsfield Lane and Shawhurst Lane (Hollywood Grange) and at Selsdon Close (The Cornfields) with another major project planned for Gorsey Lane (Bleakhouse Farm).