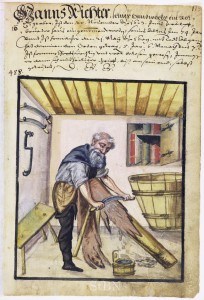 The tanning industry seems to have flourished at Tanners or Withall Green in the 17th and 18th centuries. It was certainly established by the 15th century and as Amicia, wife of John the tanner, is mentioned in the 1275 Lay Subsidy Roll for King’s Norton we may tentatively suggest a 13th century origin for this local industry. 1
The preparation of hides necessitated an abundant supply of good fresh water for rinsing the hides. They were then scoured and cleaned of hair over a period of one year by passing through pits filled with a lime solution. After two months the hides would be removed, cleansed and replaced again. Having been thoroughly scoured the hides were rinsed in the River Cole to remove all traces of the lime. Alternatively scouring could be done with the sour liquor of oak bark, which was ground in a “stone mill like a Cyder Mill”, soaked in spring water and allowed to ferment. The name Barkers Lane, first mentioned in the late 15th century, has its origin in this process of the tanning industry. Both the lime pit and bark infusion methods appear to have been employed at Wythall. The actual tanning was done in pits lined with timber either by creating layers of bark and hide adding clear water or by soaking the hides in the bark mixture. The ‘leather’ remained there for’ another year after which it would be dried on poles and pressed. 2

Wills and inventories throw some light on the extent and nature of the local industry. In 1671 Humphrey Moore of King’s Norton died leaving in his “backhouse one beame and scale and one hachell” worth four shillings – a beam was used to stretch the hides for scouring, whilst “all his leather in his tanhouse greene hyde and skinns” amounted to £33. A few years later the inventory of Thomas Collins of “Withard Greene” mentions his leather “tanned and untanned with the bark allowed for the tanning of it” worth £204 7s. 6d, “calve skinns tanned and ontanned £6 5s. 6d.” and “one beame t(w)o beame knives troughs and other tooles belonging to the trade of a tanner 6/3d.” Samuel Field’s will of 1728 makes a bequest to the preaching minister of Withall chapel, whilst his inventory lists his tanning stock 3

By 1840 tanning was confined to one family, the Grevises, who lived at Tanners Green House, now Lonnin End. The Tannery Bark Mill of 1843 is still standing, although converted into a private residence.(See below page 451.) The industry appears to have ended at Wythall c.1880 4

Another local industry relying on a plentiful supply of good water was the flax trade. Having been harvested the flax is ‘retted” or rotted thereby separating the woody core of the stem from the fibre or filament. The two principal methods of retting are ‘dew’ and ‘water’ retting. It is likely that the latter was employed at Wythall as the Cole and its tributaries create ample facilities and fill a number of retting pits. The flax would be immersed in the retting pools for a period of between seven to twenty days to allow decomposition. It would then have its bark stripped from the woody core in buckhouses and then put in to open shocks to dry. Subsequently it was crushed and split up. To wash and straighten out the fibre, the flax was “scotched” by shaking by hand and rough combing. Field names such as Lint, Yarn and Buckhouse Meadow from the 1843 Tithe Award indicate centres of flax cultivation at Barn Hill, Houndsfield, Crabtree, Chapel Green and Tanners Green Farms. Sheets were still being woven from locally grown flax in 1856 5, but the industry seems to have lapsed soon after that date. Local flax also supplied the wick yarn business situated in the late 18th century at Wythall Heath. 6

The Completion of the Rural Landscape

In 1629 the manor of King’s Norton was settled on Queen Henrietta Maria and nine years later she attempted to enclose about a third or 669 acres of the common land lying at Kingswood. The enclosure went under the guise of an improvement, but the tenants were not convinced and threw down the newly erected fences. Sir Thomas Hatton, sent to King’s Norton to settle the matter, threatened force with the result that at least part of Kingswood was thus enclosed. 7 Meanwhile individuals continued to enclose small areas of the common land for growing flax. In this way some of the long and narrow roadside fields of the parish were created.

At the seizure of the crown lands in 1649 (following the execution of Charles I) a parliamentary survey of the manor of King’s Norton was undertaken in the following year. It describes the extensive “heaths, Wasts and Comons called Boswell heath, Wake Greene, Kings heath, hayters heath, Kingswood, Norton Wood, truemans heath, Withall heath, headley heath, Walkers heath, West heath, Robery hills and the Achey (and all of them doe conteyne in the whole by estemacion’ 3000 acres or thereabouts)”. 8

These common lands were finally enclosed in 1772 when an act was passed for The dividing and enclosing the commons and wastes lands within the Manor and Parish of King’s Norton in the County of Worcester. The award was dated March 15 1774, but there is unfortunately no accompanying map. 9

William Hutton however gives us art interesting glimpse of some of the troubles he encountered with his scattered estate at Withall Heath. He writes: 10 “Other proprietors had their allotment laid near their farms; had every convenience at hand to improve them; and being upon the spot could watch that and promote that improvement at small expense. But I had no land near, no team to assist, or servants to act, but was obliged to hire all the work, and at double the price.

Every neighbour was my enemy; for ‘What right had a tradesman to come among them?’ Whatever property was movable was stolen. Even the fences I have planted three times over (were destroyed). Sowed seeds, and found fourteen horses eating the crop. No law will support a single man against a country.

Thus circumstanced I was obliged to let if for a mere trifle, which was never paid. I afterwards granted a lease . . . with a determination never to meddle with waste land.”

Jul
3
Sun
9:00 am Communion Service with hymns
Communion Service with hymns
Jul 3 @ 9:00 am – 10:00 am
A weekly service in the church building. This is usually Holy Communion. All welcome.
10:30 am Morning Worship
Morning Worship
Jul 3 @ 10:30 am – 11:45 am
Our informal morning service, with children’s groups. Once a month the children and adults are together in church for our All Together Service, usually on the 4th Sunday of the month. Coffee and refreshments follow the service.