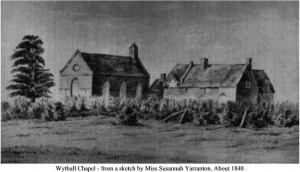 The period between the close of the Middle Ages and the late 18th century is marked by a further expansion of agriculture culminating in the Parliamentary Enclosure of 1772 – 4. In the 16th and 17th centuries several new consolidated farmsteads were created such as Barn Hill and Cranmore Farms, whilst many earlier houses on medieval sites, like Inkford Brook Farm were rebuilt.

Meanwhile the medieval estates of Houndsfield and Wythworth continued to thrive. William Sheldon died in 1517 holding the manor of Wythworth in King’s Norton, which he bequeathed to his brother Ralph. In 1633 the manor with Kilcupps watermill (see Kilcop mill Olim wihtewrthe above) was sold by William Cowper to William Chambers and in 1711 it passed into the possession of John Holmden. At the dissolution of the monasteries, Houndsfield was granted to John Arrowsmith who later sold it to William Gilbert. a former monastic bailiff and rent collector. The Gilberts continued to live at Houndsfield until the end of the 17th century, when it passed into the hands of the Bytons, who were succeeded by Grevises, Salters, Heveninghams and Stokes. 1

A vivid picture of contemporary life may be built up from such documents as manorial court rolls and probate records for this period. Within the decade 1494 to 1504 a considerable number of varied offences are recorded for Wythall people in the court rolls of the manor of Bromsgrove and King’s Norton. 2
Thus in the early months of 1504 Robert Wylles (or Wylhouse) accused Nicholas Gilbert of Houndsfield of “the taking and unjust holding of a copper pot worth 3s. 4d. on December 28th 1503 whereby he claims the defendant broke and entered his house and close at Walkersheth and took the pot to his own house”. The case continued until the end of June 1504, being considered at every court, but the defendant failed to appear.

In the rolls there are frequent references to offences concerning the failure of individuals to keep the roads and banks bordering their property in a satisfactory condition. For example in 1499 Humphrey Feld was fined twopence “through defect in cleansing the banks in Berkers Lane” and John Felde of Gorshaw four pence for a similar offence between Shawbrook and Wythworth Heath. Seven references to attempted murder are recorded in the period. One of the most interesting is that of William Columbyne who assaulted Baldwin Felde, whose son attacked the former and drew his blood. John Preston of Solyhull was fined four pence for overstocking the common and would have to pay 6/8d, if “he does it again”. John Tailor cut down a tree in Drake Lane without permission in 1500 and was fined four pence.

Inventories taken at the death of local inhabitants not only inform us of the value of all the household goods and furniture, but the later examples often list individual rooms in houses and thus provide extremely valuable information about the layout and size of homes in the period. The inventory of Richard Gilbert of Houndsfield taken on 23rd September 1687 gives a vivid impression of the home of a wealthy yeoman. His whole goods were valued at £1,118 14s. 4d, of which £880 were out in “hopefull debts”. The inventory refers to twenty feather beds and five four posters with provision for thirteen servants. Some refineries, such as two looking glasses, screens and a few books, are also mentioned. The house contained eight living and three working rooms with eight storerooms. We are also told that there were two furnaces in the old kitchen, a malt mill in the “South floer” and a gatehouse room.

Mary Lea, whose inventory is dated 4 May 1678, lived at Lea Green Farm, a house largely rebuilt in the 19th century. She was a member of a very old King’s Norton family and appears to have been a spinner of local flax into yarn, as the inventory refers to three spinning wheels, yarn and a large stock of “linnens”. William Collins died at “Withworth Greene” in 1718 leaving extensive estates in King’s Norton, Birmingham and Harborne. His inventory describes him as a tanner but having no stock or tools and £270 in “ready money” it looks as if Collins sold his tanning business shortly before his death. From the will of Mary Holbech of “Withall alias Wigghall” of 1721 we learn that she was related to the Middlemores, another old King’s Norton family. Mary probably earned a living laundering as six large and little tubs are mentioned and other washing utensils coming to £2 8s 3d out of a total of £26 12s 6d. 3